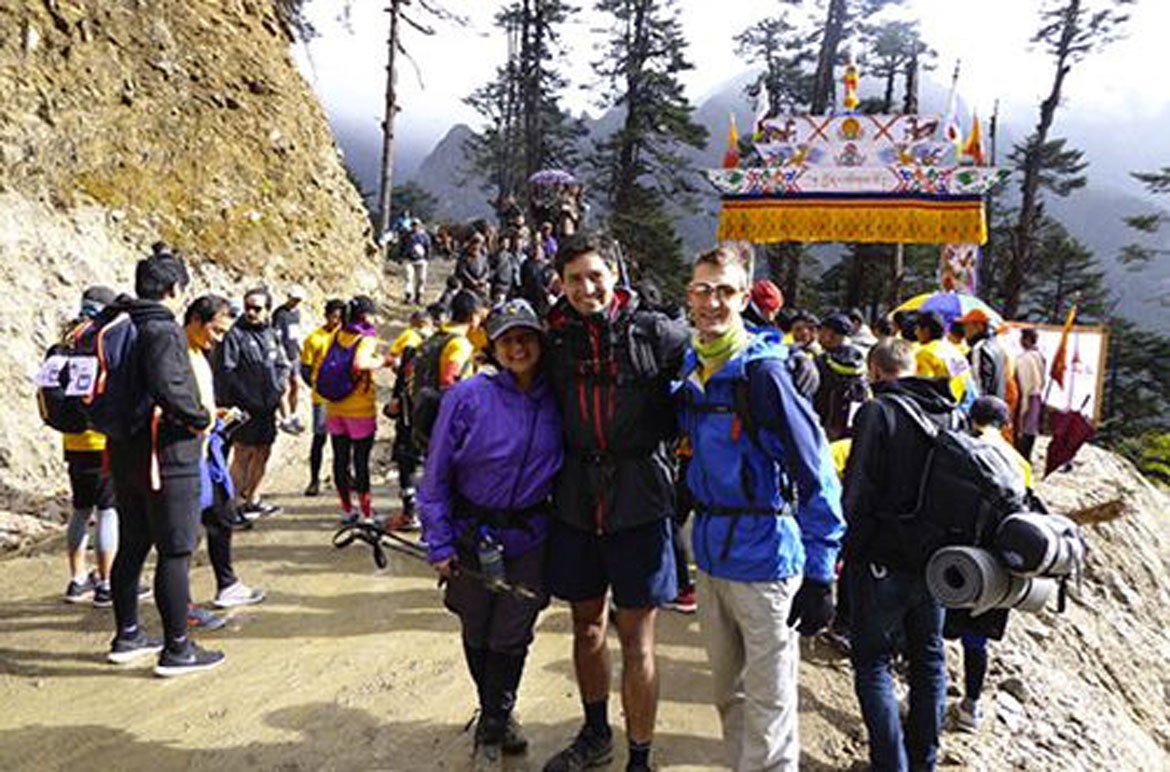 Two years ago, without hesitation and any prior training for high altitude racing, I signed up for the first Laya Run. This would be my second memorable trip to the majestic hidden land of Laya after four years, and just as awe-inspiring as the first, albeit more physically demanding because of its competitive element and the difficult physical endurance of the run. Despite my lack of training, I was happy to complete the two-day 53-kilometre race, and celebrated the accomplishment high up on the festival grounds by participating in many fun and engaging activities, including the strongman/strongwoman race. This pioneering race laid the ground the annual Laya Run, a shorter one-day race that now takes place every year at the same time as the Royal Highland Festival.

I was ecstatic when the second annual Royal Highland Festival and Laya Run was announced in early 2017. The initial hesitation of this amateur mountain racer was replaced with excitement at the allure of a shorter 25-kilometre distance with a gain of 2000 metres over one day of racing. The festival organizers thought of everything, from our special Laya Run race jerseys, unique race numbers, luggage transport on horse-back, medical teams to accompany the race, special dinners, accommodation at the Gasa hot springs guest house, home stays in Laya, high energy snacks and refreshments along the route, garbage pits to accommodate trash, special rest tents for runners on the festival grounds, medals and certificates to commemorate our run, and much more. We were very well taken care of throughout the journey.

On the day of the race, we left Gasa hot springs early in the morning in a caravan of cars under the drizzle of rain. The race started from Ponjothong, on the country road that will eventually connect Laya. Inspired by moving speeches and words of encouragement from Gasa officials, and an enthusiastic cheering crowd, 73 men followed by 23 women runners began the stunning Laya race. Beginning with a criss-crossing descent into the valley, we ran along the dirt road to Koina, where we crossed the crystal-clear waters of the Mochu. From there, the route took a sharp climb upwards, followed by several undulating ascents and descents until we reached the white sand and pebbled beaches on the banks of the fast-flowing river. We would cross the Mochu several times, across wooden bridges and planks, and eventually make a gradual ascent to the Taktsemakha army camp. At pit-stops set up every 5 kilometres along the route, Laya run volunteers welcomed us with water, refreshments, chocolate and energizing snacks to help power us on.

The assistance of the Laya Run volunteers was a great blessing, as the soles of my trekking boots gave out halfway through the race. Although I ran 3 kilometres with the soles incessantly flapping up and down as I ran along the mud-filled rocky slopes, I was extremely happy to see the medical officers, race volunteers and the army officers at the 15-kilometre pit-stop, who through bouts of contagious laughter, helped me to reinforce my boots with rope, pieces of cloth and bandages (needless to say, a lively letter is duly being written to the Vasque boot company). It is because of their kindness, support and ability to make me smile after at a point in the race where I thought I might not be able to make it that I was able to complete the race. Demonstrating extreme kindness and generosity, one Bhutanese racer accompanied me during the latter part of the race, as my boots caved in again under a deluge of rain as cold mountain weather rolled in, even though this meant he would have a slower race time. I am deeply grateful to his encouragement and act of kindness, which symbolizes the generosity of the volunteers and our Layap hosts who supported us throughout the event.

The last part of the run consisted of one final descent, followed by a steep ascent up to and through Laya town and the festival venue, Langothang, located at 4,100 metres above sea level. Just as we thought we were nearing the finish line, the route took a sudden circuitous path around and up to the hill overlooking the festival venue, from where we finally ran downhill to the colourful finish line. A cheering crowd awaited us, and we were welcomed with khatas and gold medals, followed by hot tea and lunch as we dried our rain-soaked selves around small bonfires. The champion of the race in the women’s category was Choki from Pazhi chiwog in Laya with a time of 2 hours and 41 minutes. In the men’s category, the champion was Sangay, an army officer from Paro, who completed the race in 1 hour and 59 minutes. Almost all the runners completed the race, except for two. I was happy to complete the run at a time of just over 6 hours, losing an hour or more due to my boots.

The evening following the race showcased dance performances, jokes and songs by famous Bhutanese actors, comedians, celebrities, as well as Layaps during a happy and festive evening of celebration. Despite constant rain, the event drew large crowds who huddled around blazing bonfires to stay warm. The event was once again kindly graced by His Majesty the Fifth King of Bhutan Jigme Khesar Namgyal Wangchuck, who mingled amongst the crowds, and upon seeing me, greeted me warmly and with great kindness. I was awestruck by his vision and passion for this historic event, which was inspired under the initiative spearheaded by the Gasa dzongdag.

The Third Laya Run Next Month

The third edition of the Laya Run will take place on October 23rd from Panjothong to Laya. Covering a total of 25 kilometres over one day, it is considered one of the most scenic high-altitude runs in the world. This year, the race will feature two competitive categories for both women and men: the open category (under 39 years old) and veteran (above 40 years old). For questions about: the Laya Run, the Royal Highland Festival please visit www.gasa.gov.bt, or contact 16288181, 16288134, 16288127, 16288100 (RHF) and 16288124/16288115 (LR). The third part of this article about the epic Snowman Run scheduled to take place in 2019, for whichthe Laya Run was the pilot and precursor, will appear in the next weekend issue of Kuensel.

Ethical and Mindful Travel to Laya and Beyond

As word spreads about unique and special off-the-beaten-path locations in northern and eastern parts of Bhutan, the Laya Run, the Royal Highland Festival and other unique venues are likely to draw a greater number of foreign tourists this year and into the future. However, the ability to visit culturally preserved communities comes with great responsibility and the need for profound mindfulness. It is also calls for the need for ethical and culturally sensitive travel which sincerely respects local social norms and customs that exist in culturally fragile locales, as well as the importance of treading lightly to preserve and respect local culture, ecologies and spiritual practices of unique, unfrequented areas in Bhutan. To ensure that revenue from tourism remains in Bhutan to benefit the sustainable development of the nation and local communities, means bookings directly with Bhutanese tour operators, ensuring on-line booking apps are Bhutanese owned and operated, and that travel respect sustainability, ethical and non-exploitative principles of tourism that are congruent with Gross National Happiness.

Senior researcher and strategic adviser for the Tarayana Centre for Social Research and Development, and associate professor College of Language and Culture Studies, Royal University of Bhutan. Parts of this article were previously published in Tashi Delek, the inflight magazine of Drukair, Royal Bhutan Airlines.