Why didn’t I support the Tobacco Control (Amendment) Bill of Bhutan 2021?

Home > Blogs > Why didn’t I support the Tobacco Control (Amendment) Bill of Bhutan 2021? 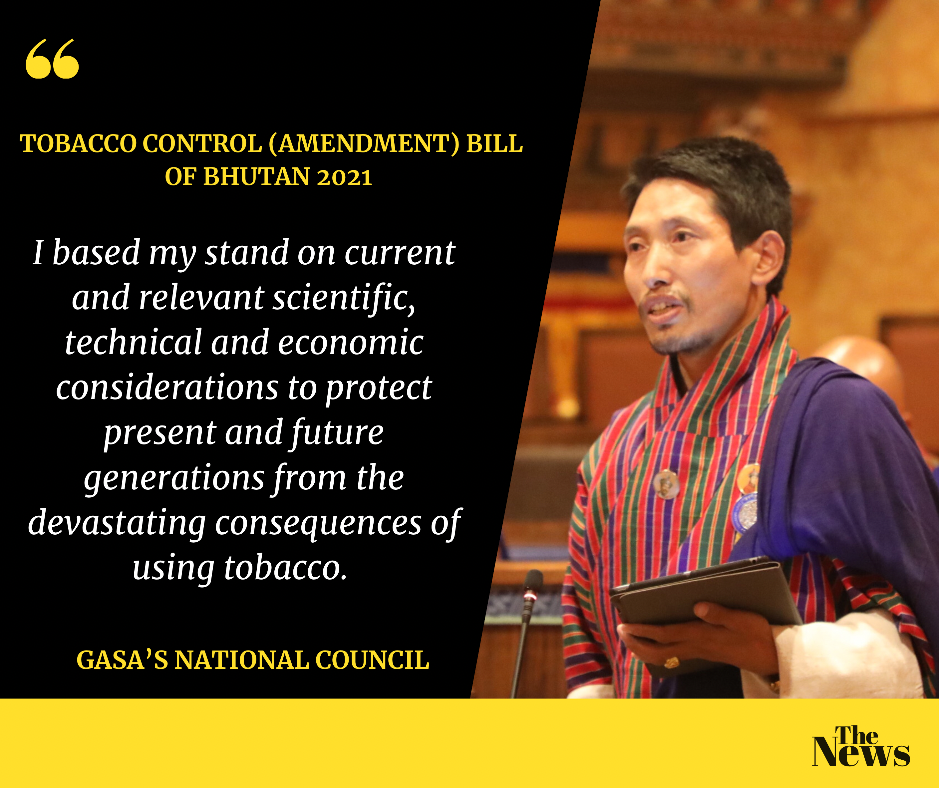 The parliamentarians in the past invested so much time and resources in deliberating the Tobacco Control Acts, but the recent amendment easily sailed through both the Houses of the Parliament without much debate, on the pre-condition that it is an “Urgent Bill.”

However, I could not support the amendment bill.

It was not because I am a superstitious or hypocrite. I based my stand on current and relevant scientific, technical and economic considerations to protect present and future generations from the devastating consequences of using tobacco. I always stand by my principle – the interest of the nation and the people. Furthermore, the Kantianism Theory rightly stated that an action is morally right if it is motivated by the goodwill that stems from a sense of duty.

Since Bhutan ratified the World Health Organization’s Framework Convention on Tobacco Control (WHO FCTC) on 23rd August 2004, the country prohibited cultivation, harvesting, manufacture, supply, distribution and sale of tobacco products through the enactment of the Tobacco Control Act of Bhutan 2010 (amendment 2012 and 2014) and enactment of the Rules and Regulations 2011 (amendment 2013 and 2015).

The Parliament enacted the Tobacco Control Act in 2010 and deliberated on amendments in six parliament sessions, considering the following points.

The banning isn’t a solution nor making tobacco readily available and affordable is a wise decision. The existing legislation ensures non-smoking areas, offences and fines for buying tobacco products, restrictions on advertisement and promotion, and procedures of import for personal consumption.

Tobacco continues to be the leading cause of preventable non-communicable disease, deaths and disability – affecting people in the most productive years. According to a World Health Organization report, the tobacco epidemic is one of the biggest public health threats: more than 8 million people die in a year worldwide. More than 7 million deaths were from direct tobacco use, while around 1.2 million deaths related to second-hand smoke.

WHO Office for Southeast Asia reported that tobacco kills an estimated 221 people each year in Bhutan. Among others, heart disease and stroke are the most common ways people die of tobacco use. Most people start early, increasing the risk of heart disease in younger people – the mean age of initiation stands at 18.9 years.

Therefore, Tobacco control is essential for preventing and controlling deaths and disabilities. More than 120,000 active tobacco users and those exposed to secondhand smoke are at increased risk of cardiovascular diseases.

Tobacco-related mortalities would rise while the average life expectancy of 71.46 would be reduced.

Evidence suggests that the severity of COVID-19 is higher among smokers. The COVID-19 fatalities are higher among people with pre-existing conditions, including non-communicable diseases such as cardiovascular and chronic respiratory conditions, cancer, and diabetes.

Therefore, the recent amendment of the TCA (2021) could also defeat the Ministry of Health’s strategy to gain herd immunity to combat the pandemic.

Over 80% of tobacco users are in low and middle-income countries, where the burden of tobacco-related illness and death are the heaviest. Tobacco use leads to poverty by diverting household spending from basic needs to tobacco.

Findings from the 5th Global Youth Tobacco Survey revealed that more than one out of five students (22.2%) currently use tobacco products (2019). The prevalence of current cigarette smoking was 14.7%. 12.5% of students currently consume smokeless tobacco products.

Despite the stringent laws, tobacco consumption remained high in Bhutan, and youth start using it at a very young age. The recent amendment of the Tobacco Control Act has exposed an economically productive population (30–69 years) of 3,32 000 (41%) and a youth population (13–17 years) of 73 000 (9%) to the risk associated with tobacco use.

Therefore, the economic costs of tobacco use are substantial and include high health care costs.

The recent amendment of the TCA (2021) will have an impact on individuals, families, and the nation. Research indicates that the poor are the ones who smoke the most. Tobacco worsens poverty among its users. Smoking accounts for much of the mortality gap between rich and poor.

Tobacco use imposes a heavy burden on society and families by – increasing illnesses and deaths – affect the economic situation of tobacco users and their dependents. There is also a threat to the environment.

Tobacco-related diseases kill one-fourth of smokers in the middle of their active life, which will seriously impact family members dependent on their income.

The government’s recent decision on tobacco, making it freely available in the market is also against the Buddhist doctrine and religiously sensitive to discuss. Let the law of Karma take care of itself.

Will the TCA (Amendment) stop smuggling in the border areas?

The government presented the Tobacco Control (Amendment) Bill saying that tobacco smuggling cases had increased with the imposition of restrictions at the points of entry at the southern borders, and the smuggling caused security risks in the country.

The Southern Covid-19 Task Force had pointed out that tobacco smuggling was the main reason for the spread of Covid-19 in the southern dzongkhags, as presented by the Economic affairs minister. The government believes that tobacco will be readily available at lower prices if the Act is amended, and the smuggling cases will fall. On contrary, the minister also confessed that the Duty-Free Limited had not adequately served all consumers, although Bhutan Duty-Free Limited is one of the State-Owned Enterprises under the Ministry of Finance.

If what the government claim is valid, how about the drugs-related smugglings in the border areas?

Nevertheless, the amendment’s implications for the future of the nation and people are beyond impairment.

The government had also waived 100 percent tax with the amendment of the Tax Bill of Bhutan 2021, which makes the situation even worse. Tobacco will be readily available and affordable, turning it into everyone’s choice.

WE ARE SETTING HOME ON FIRE JUST TO KILL RATS!