Officials from ECB have made a brief presentation on the followings; 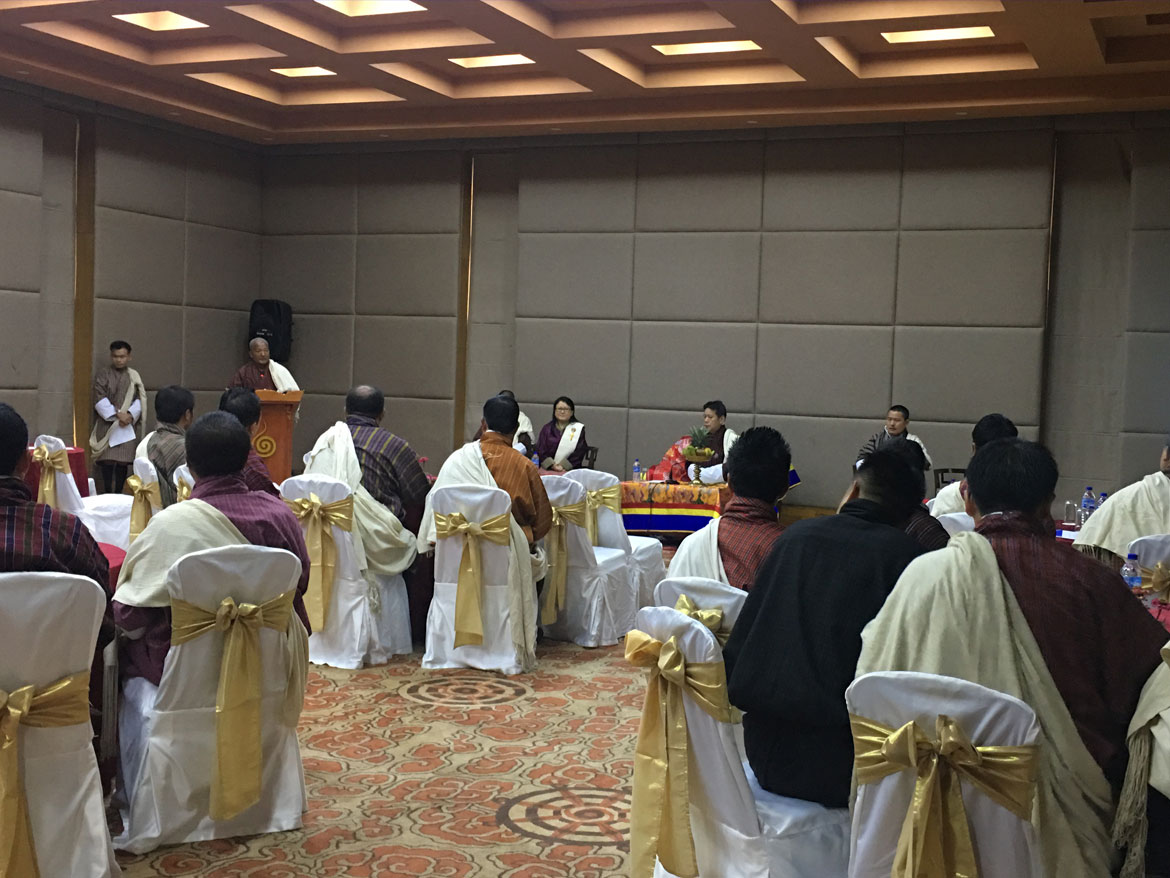 The House resumed with the deliberation on the Customs Duty Bill today. The House...

The National Council deliberated the Goods and Services Tax (Amendment) Bill of Bhutan 2021...

The Natural Resources and Environment Committee (NREC) of the National Council presented an interim...

In the 6th Sitting of the Session, the Legislative Committee presented a report on...

National Council deliberated on the Civil Society Organization (Amendment) Bill of Bhutan 2021 in...

His Excellency Lyonpo Namgay Tshering, Minister of Finance, introduced the Agreement between the Government...

The Natural Resources and Environment Committee of the House presented the follow-up report on...

Hon’ble Chairperson of the National Council, on behalf of the Members and the Secretariat,...

Closing Ceremony of the fourth Session of the Third Parliamen

His Majesty The King graced the Closing Ceremony of the fourth Session of the...

State of the Nation report to the Parliament

The Prime Minister presented the State of the Nation report to the Parliament. As...

Today, the final sitting of the 26th Session of National Council (NC) concluded with...

The Chairperson of the Public Accounts Committee (PAC) presented the Committee’s Review Report on...

Civil and Criminal Procedure Code (Amendment) Bill of Bhutan 2019 The Chairperson of Joint...

The Foreign Affairs Committee presented the Framework Agreement between the Royal Government of Bhutan...

Hon’ble Minister for Finance introduced the Framework Agreement between the Royal Government of Bhutan...

During the 7th sitting held today, the House adopted the Mines and Minerals Bill...

In the 6th sitting, the Chairperson of the Economic Affairs reiterated that the Fiscal...

In the 5th sitting, the Hon’ble Minister of Finance, Namgay Tshering introduced the Fiscal...

In the 4th sitting, the House introduced and deliberated on the Negotiable Instruments (Amendment)...

The third sitting resumed with the deliberation on the Mines and Minerals Bill of...

Today in the 2nd sitting of the session, the Hon’ble Minister for the Economic...

Opening Ceremony of the National Council of Bhutan

The opening of the 26th Session of the National Council began with a Marchang...

Opening Ceremony of the Fourth Session of the Third Parliament

His Majesty The Druk Gyalpo graced the opening ceremony of the Fourth Session of...

The 25th Session of the National Council concluded today. In the closing address, the...

Continuing with the deliberation on budget, members acknowledged the government for its commitment and...

The House deliberated on the National Budget Report for the Financial Year 2020-21 which...

The Finance Minister presented the National Budget Report for the FY 2020-21, and introduced...

The 25th Session of the National Council commences as commanded by the Royal Kasho...

The plenary session commenced coinciding with the 30th birth anniversary of our beloved Queen,...

The team led by the new CEO Dasho Kinga Tshering presented follow up on...

The 24th Session of the House concluded today in the august hall of the...

Adoptions of Bills and Recommendations on the Reports

In the 30th sitting, the House adopted final resolutions as proposed by relevant committees...

Continue deliberation on improving the Quality of Education

Today, the House deliberated on the recommendations submitted by the Good Governance Committee (GGC)...

Continue deliberation on the Review of Human Trafficking in Bhutan

27th sitting of the House continued with the deliberation on the recommendations on the...

NC adopts recommendations for the withdrawal of GST Bill

26th Sitting: Adoption of the recommendations of the Committee on the GST Bill for...

The House adopted the Pay Revision (Amendment) Bill of Bhutan 2020 and the Supplementary...

The House deliberated on the Pay Revision (Amendment) Bill of Bhutan 2020 followed by...

Presentation of the Goods and Services Tax Bill of Bhutan 2020

Deliberation on the FI (Amendment) and Property Tax Bill 2020

Introduction of the Fiscal Incentives (Amendment) Bill of Bhutan 2020 and the Property Tax...

The members of the NREC presented the interim review report on the RNR Marketing...

17th Sitting: The House adopted the Tax (Amendment) Bill of Bhutan 2020. Subsequently, the...

Today, the House deliberated on the Tax (Amendment) Bill 2020, adopted the Income Tax...

Re-deliberation on Impeachment Procedure Bill of Bhutan 2019 and the Minister and Minister Equivalent...

Presentation on the GST by MoF

With an objective to understand and have a clear background on the intent of...

In the 11th sitting the Economic Affairs Committee presented the Review of Policies related...

9th Sitting: The House continues with the deliberation on the Lhengye Zhungtshog Bill of...

In the 8th sitting, the House resumed with the deliberation on the Lhengye Zhungtshog...

The Social and Cultural Affairs Committee (SCAC) of the House introduced the Lhengye Zhungtshog...

In the 5th Sitting, the Legislative Committee introduced the Civil and Criminal Procedure Code...

Today, the House resumed the deliberation on the Penal Code (Amendment) Bill of Bhutan...

The second sitting of the House resumed with the deliberation on the follow-up reports...

Opening Ceremony of the 24th Session of the National Council

His Majesty the King graced the opening ceremony of the third session of parliament...

Attending the 3-days workshop on advanced media literacy held from 18-20th December, 2019 at...

The 19th Asian Pacific Parliamentarians’ Conference on Environment and Development

Attended the 4th Edition of the Royal Highland Festival at Laya

Attended the 4th Edition of the Royal Highland Festival at Laya accompanied with Honorable...

Local governments are closest to the people, which serves the people best. Attending the...

This program aims to provide the participants with the knowledge and understanding of the...

As the Committee was assigned with one legislative issue and one policy issue by...

Closing Ceremony of the 2nd Session of the Third Parliament

His Majesty The King graced the Closing Ceremony of the 2nd Session of the...

Presentation of the Performance Audit Report by Public Accounts Committee

Adoption of amendments and recommendations on Budget and Appropriation Bill 2019-2020 Adoption of Impeachment...

Presentation of Budget and Appropriation Bill 2019-2020

Adoption of amendments and recommendations on Pay Revision Bill

Adoption of amendments and recommendations on Pay Revision Bill of Bhutan 2019.

16th Sitting; Deliberation on Recommendations of the Ad-hoc Committee on Pay Revision Bill of...

The 15th sitting convened with the introduction of the Pay Revision Report by the...

Review Report on Harmful Use of Alcohol

The Good Governance Committee presented the review report on Harmful Use of Alcohol to...

Impeachment Procedure Bill of the Kingdom of Bhutan 2019

The Natural Resources and Environment Committee introduced the Impeachment Procedure Bill of the Kingdom...

Review Report on Technical and Vocational Education and Training

The members of the Special Committee on Technical and Vocational Education and Training (TVET)...

The House unanimously ratified the Amendment to the Montreal Protocol on Substances that Deplete...

Follow-up Reports on the Resolutions of the 22nd Session

The 2nd Sitting of the National Council convened with the deliberation on the follow-up...

It was a great experience attending the conference and listening to the prominent speakers,...

I had the pleasure of visiting Laya Central School and interacted with teachers and...

The ECCD centre which was established with support from UNICEF was inaugurated on April...

I had a great pleasure of visiting one of the pioneering academic institutions-Bjishong Central...

Had a fruitful consultative meeting with sector heads of Gasa District followed by meeting...

Consultative meeting on the Draft Impeachment Procedure Bill of Bhutan 2019

The Natural Resources and Environment Committee (NREC) held consultative meeting with the Holders of...

Presided over by the Hon’ble Chairperson, the members convened for its 12th plenary meeting...

In pursuit of thorough policy review and as a part of in-depth discussion, the...

The Natural Resource and Environment Committee convened the 7th meeting today to discuss on...

Today I had an opportunity to deliver Madanjeet’s Singh memorial lecture on the occasion...

Today I had a pleasure of visiting the UNESCO Madanjeet Singh Centre of South...

We had a great opportunity to visit King Prajadhipok’s Institute (KPI) today. The institute...

140th Assembly of the Inter-Parliamentary Union

It was a great honored to be part of the Bhutanese parliamentary delegation led...