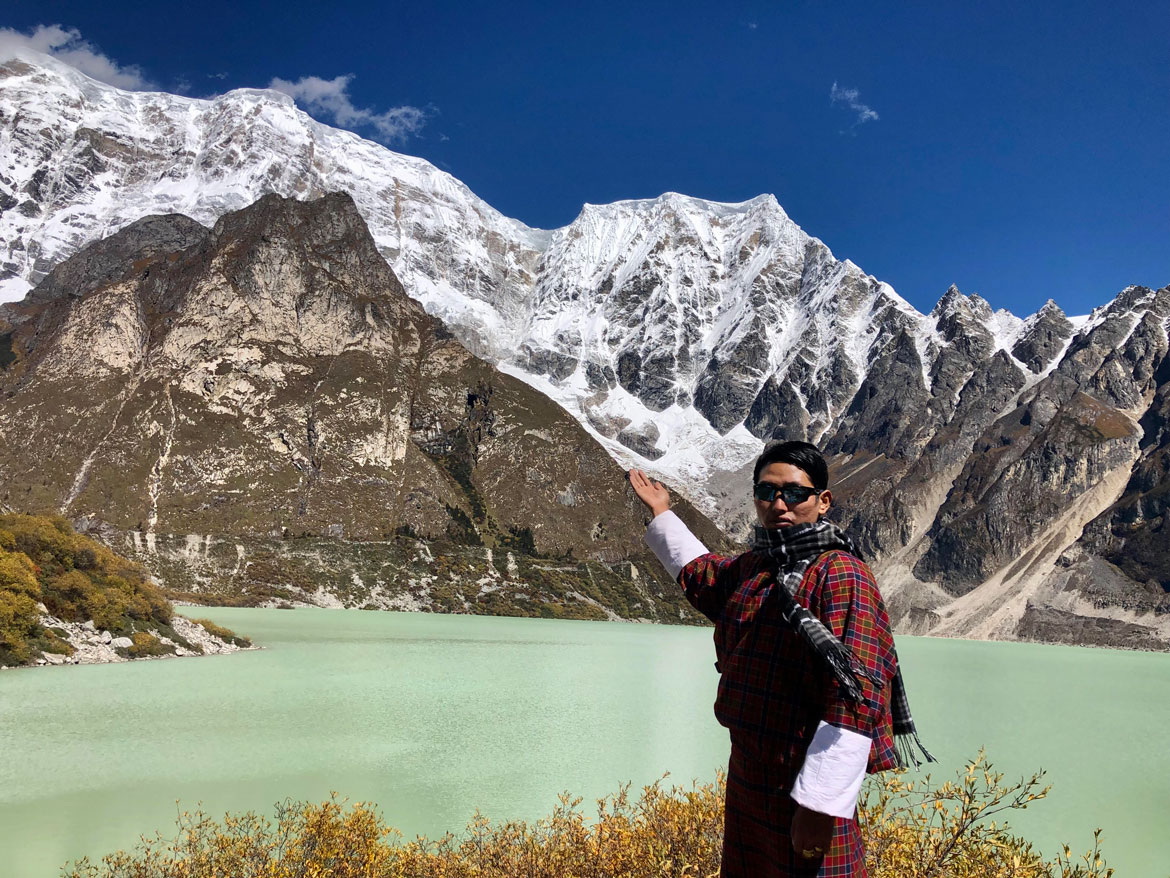 Climate change is a global concern today. It is hitting us hard, and that is due to an insatiable desire for so-called ‘unsustainable development; a concept propagated by some western thoughts.

Bhutan has already felt the impact of climate change and more than 17 events had occurred in the 19th century. The glaciers in the Himalayas; the world’s greatest repositories of snow and ice are retreating at a rapid pace. This has led to swelling of the glacier lakes and increasing risks to the fragile mountain ecosystem.

In Bhutan, 677 glaciers and 2,674 glacial lakes were identified. Of the total lakes, 24 were considered potentially dangerous (Mool et al. 2001). Over the past two centuries, we have experienced more than 20 glacial lake outburst floods (GLOF).

The threat of GLOF still looms large in the Himalaya. Bhutan has been acutely aware of its vulnerabilities due to climate change and frequent seismic activities. One of the recent GLOF events in the region was the outburst of Lemthang Tsho (lake) on July 28, 2015, and the breaching of subsidiary lake II of Thorthormi Lake on June 20, 2019.

Asian Development Bank highlighted that the glaciers of Bhutan, which covered about 10 percent of the total surface area in the 1980s, are an important renewable source of rivers in the country.

There are four major lakes located in Lunana namely-Thorthomi, Raphstreng, Luggye, and Baytsho. Thorthomi and Raphstreng are two of the 25 glacial lakes in Bhutan that pose serious GLOF risks. Pho Chhu sub-basin is the most vulnerable valley in terms of GLOFs (NCHM 2019).

The past records heavy damages on properties, livestock, and settlement because of GLOF incidents. The 2008 UN reported that Himalayan glaciers would melt within 25 years. In 2009, the rate of glacial melt in Bhutan was three times the world average.

Over the previous three decades, regional temperatures had risen by 2.7 °C (4.86 °F). According to the US geological survey report, 66 glaciers have decreased by 8.1 percent in the last 30 years in the country.

The Thorthormi glacial lake is considered the country’s likeliest climate-induced disaster. The lake, perched at the height of more than 4,400 metres, is swelling because of melting ice and is in danger of bursting its wall (www.downtoearth.org.in).

There are other external factors like earthquakes, avalanches, and falling of rocks, which have a triggering effect besides glacier retreat alone.

It was observed that Thorthormi is not a fully formed lake. It’s under the forming stage. Small ponds of melted glaciers are converging into larger lakes gradually. Just below Thorthormi, divided by a large moraine wall, lies the Raphstreng Lake.

It is evident from the NASA Earth Observatory image by Robert Simmon, 2009, that the moraine wall, which divides Thorthormi and Raphstreng, has a vast ice body at 80 meters depth. Scientists have raised concerns over the structural strength and stability of the moraine dam.

Studies confirm that Thorthormi Lake and other ponds in the Thorthormi glacier are expanding. The landmass is said to be shrinking by the year. Recent satellite images show the unsteady moraine dam is receding at an alarming 30 to 35 meters every year (www.downtoearth.org.in).

The moraine ridge will not hold forever, and that Thorthormi will spill over into Raphstreng Lake one day. The convergence of the two lakes could trigger a major GLOF (www.bbs.bt). If this happens, the water from Thorthormi would spill over to Rapstreng and both lakes might burst.

In the worst-case scenario, the convergence of Thorthormi and Raphstreng would cause severe floods that would affect regions in Punakha. The GLOF is expected to be three times more than the 1994 GLOF, according to a report from the third pole.

It would threaten communities of Lunana, Punakha-Wangdue district, and others in the downstream. The majority of Bhutan’s population and infrastructure are concentrated in the broad river valley and the climate-induced GLOFs would cause significant human and economic devastation.

The World Wildlife Fund (WWF) says half of the fertile land in Punakha and Wangdue valley will be submerged underwater. Punakha Dzong and much of Khuruthang could be submerged too.

The melting of ice at Thorthormi Lake caused an increase in the water level by almost two meters (www.drukgreen.bt). This incidence has prompted the government to issue a nationwide flood advisory last year.

The research further indicated that any significant disturbance on Thorthormi Lake could result in a GLOF, potentially with massive cost to life, property, and infrastructure.

Currently, the moraine dam has sufficient mass to withstand the hydrostatic (water) pressure from Thorthormi Lake. However, the local hydrologist raised concern that if the melting continues due to a rise in temperature, the moraine will not be able to hold.

If the two lakes combine and cause a GLOF, it will travel much faster this time because the river channels have already been cleared of debris and other hindrances by the 1994 flood.

One of the worst situations for Bhutan is a combination of a heavy rainstorm and GLOF happening at the same time. This could also have serious implications across the border downstream in India.

The countries in the region will have to rethink both disaster preparedness as well as infrastructure development (www.thethirdpole.net).

Climate change as a global concern is already impacting millions of people all over the world, making lives more vulnerable. The hardest hit in the world is the people living in developing countries like Bhutan.

Two of the most significant hydropower projects in the country, the 1,200 MW Punatsangchu-I and 1,020 MW Punatsangchu-II, built downstream the Thorthormi Lake, will be in grave danger, and the biodiversity in the region would be affected.

What is more worrying is that the government has prioritized the construction of the 2,560 MW Sankosh hydropower project along with the same river system (www.thethirdpole.net).

GLOFs also possess risk on crucial development sectors like agriculture and forests in the Hindu Kush Himalayas, according to The International Centre for Integrated Mountain Development.

Agriculture in Bhutan provides livelihoods and employment to more than 75% of the population. The majority of the people practice subsistence farming on small marginal lands holdings. These are extremely vulnerable to flood impacts.

According to National Geographic, the Himalayan Mountains is home to the third-largest deposit of ice and snow in the world after Antarctica and the Arctic. It was warned that the Himalayan region could be facing an epic disaster between extreme heat waves and reduced water flows from the Himalayas.

Today there is a need for a societal awakening and to spend a significant part of the economy to avoid the catastrophic risks we are facing.

The 1994 GLOF was the catalyst for the need to establish an early warning system (EWS) giving downstream inhabitants time to evacuate (www.hydromet.gov.bt).

The Flood Warning System in Lunana is a crucial part of GLOF risk mitigation efforts. Early warning sirens have been set up and safety evacuation zones identified along the Punatshangchu and Pho Chhu basin.

The first automatic GLOF Early Warning System was operational since September 2011. The early warning systems are only to help us minimize the damage to lives and property.

Artificially draining the lake is one method of reducing risk. Preparing hazard zone maps of the downstream region to study the impact of the flood and several efforts have been undertaken to mitigate GLOF risks.

A three-year project to lower the Raphstreng lake water level by four meters was completed in 1998. A similar project was carried from 2008 and 2011 at the Thorthormi that saw 17 million cubic meters of water drained out from the lake.

With the risk becoming severe daily, the government is now looking to step up monitoring of temperature in the Thorthormi area by installing more sensors.

Without required measures in place, the lake outburst would have far-reaching impacts on the settlements, historical monuments, and hydropower, the most. Therefore, we need to be more sensitive to GLOF risks.

Having said that, in my capacity as a water resources engineer and decision-maker in the Parliament, I have made a site inspection to Raphstreng and Thorthomi Lake during the Constituency visit in October 2019 to observe the ground reality.

Despite my limited knowledge of climate change and its related impacts, it is evident that the GLOF is real, it is going to happen eventually and we should always be vigilant, as per my observations at the site.

Therefore, reducing climate change-induced risks and vulnerabilities from glacial lake outburst floods should be our priority and address the adverse impacts of climate change.

Studies revealed that there is a need for proper risk management practices, which starts from the identification of critical glacial lakes and to prioritize in-depth investigation.

As a long-term adaptation, Bhutan should prioritize water resource management, diversification of energy, climate proofing of hydropower and infrastructure, agriculture diversification, and awareness, among other things. Advocacy to cope with health risks, enhancing preparedness, and understanding of GLOFs triggered by climate change should be focused.

The Impact of Bhutan’s impending climate disaster in the future will be far more significant unless the government prioritizes the above-mentioned disaster mitigation efforts.

Disclaimer: Views expressed are those of the author’s own unless cited and concerns shared as the responsible people’s representative.