Question to Minister of MoAF on Cordyceps Collection Issues 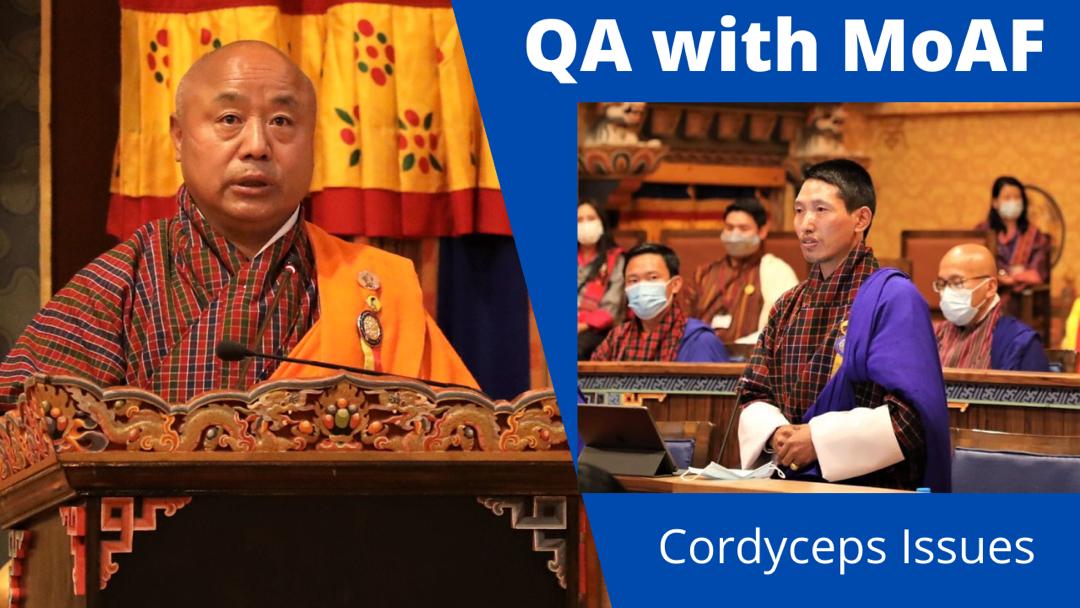 The legalization of cordyceps collection following the Royal Command issued by His Majesty the King in June 2004 has tremendously improved the living conditions of the people in highland dzongkhags (Kuensel, 2005). The slaughtering of yak for meat dropped, and equality improved among the highlanders, dispelling division between haves and have-nots in the community. The policy prevented poachers from across the border and encouraged highlanders to stay in their community, safeguarding our border areas in the north.

The Ministry of Agriculture and Forests (MoAF) presented to the National Council on the legalization of Paris Polyphylla and cordyceps harvesting period, amongst other issues (Royal Banquet Hall on 12th September 2018).  During the consultation meeting, members asked about the possibility of providing adequate preparatory days to collect cordyceps. The officials of MoAF informed the committee that they would inform the House with proper research and accurate information. However, the committee did not receive any update so far.

Our consultations with Local Government Leaders of 14 gewogs in 7 dzongkhags found out those preparatory days differed from gewogs to gewogs. Some gewogs were provided only 2 days besides a one-month collection period.

On 30th May 2020, Dangchhu, Gangtey, Kazhi and Saephu gewogs had also requested an extension of collection days for two weeks.

The House acknowledges MoAF for extending two weeks to the highland communities in 2020 as the year was affected by late snowfall; unprecedented heavy rainfall was impacted by cyclone ‘AMPHAN’ and other extreme weather patterns (Ref.: MOAF/DDFPS/2020/333,  dated on 2nd June 2020). The time extension was expected to help a highland society economically because cordyceps are the primary sources of livelihood.

Due to varying climatic condition, collectors need at least 2 weeks of preparation besides a one-month collection period. This will also address the conflict between the cordyceps collectors and forest officials in the field.

During the National Council’s review workshop at Institute for Management Studies Limited (IMSL) on 12th and 13th April 2021, these issues were highlighted to be genuine. The House directed the committee for the concerned Minister to update the status on the extension of preparatory days for cordyceps collection.

The cost of cordyceps started with less than Nu. 60,000 per kilogram in 2004 and now fetched an average of  Nu. 1 million per kg (Cordycep Report, 2019). The records show that an average of 400 kg of Cordyceps Sinensis auctioned every year worth more than Nu 200 million. It is one of the export products and contributed more than 3 million royalties every year besides business income tax to the government and other economic and social benefits.

Considering all the above points, the National Council hereby asks the MoAF Minister to clarify the following to the general public:

The Minister informed the House that the collection time and permit for cordyceps collection were not uniform across the growing areas because of the different growing times of the Ophiocordyceps Sinensis. The local government has the full authority to decide on the preparatory period, as they know the ground reality for the collection period, situation, and the background of the collectors. The Minister also said that the Ministry would approve the extension if they receive the resolution and proposal from Dzongkhag Tshogdue.

Comment: The Minister’s statement is loud and clear that the LG leaders have full authority to provide an adequate preparatory period for the collectors, and other officials also should take note of it.

Comment: We are delighted with the government’s response on the extension of the collection period during the severity of climate factors. However, we insist that it should be incorporated in the revised guidelines. It should be systematic but not at the whims of politics.

Comment: We felt that the government should develop more holistic, sustainable harvesting programs such as proper waster management, improve R&D on Cordyceps domestication and installing weather reading instruments in the collection sites for climate impact studies.

MoAF has no authority over the border demarcation issues. However, the Minister said that a consultation meeting with the National Land Commission is underway. Once finalized, the Minister would inform both the House accordingly.

Comment: It was observed that a letter which was sent to the National Land Commission was for boundary conflict between Wangdue & Bumthang Dzongkhag. It seems that MoAF has not taken any initiative concerning the border conflict between Gasa & Wangdue Dzongkhag. Therefore, we would further recommend that the MoAF and the concerned authorities take prompt action in resolving the border issues.