We cannot breathe in peace unless we electrify Lunana

Home > Blogs > We cannot breathe in peace unless we electrify Lunana 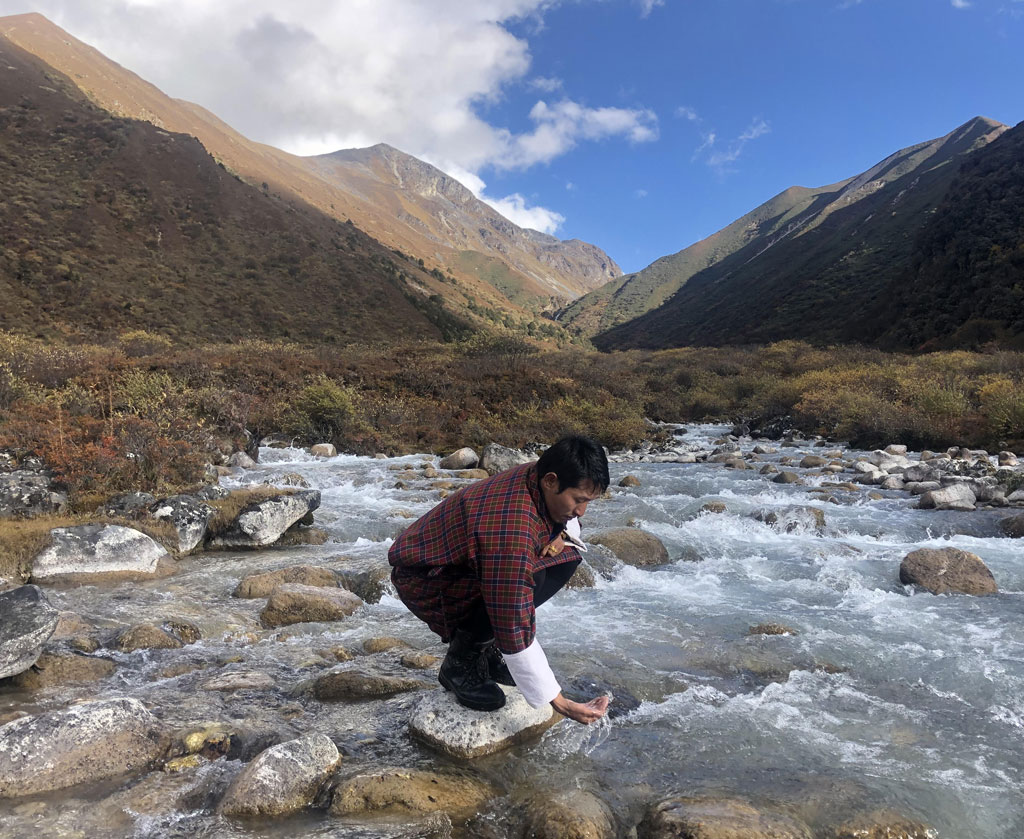 It gives me immense pleasure to share that the plan to set up a mini-hydropower plant in Lunana looks positive. I learned from my visit (October 10, 2019) to the site that pre-feasibility study of the project is completed.

The Government has allocated 7 million in the financial year 2019-2020 to conduct DPR of the project.

Since people of Lunana had raised this issue consistently during my constituency visit, I asked Honorable Prime Minister about the need to provide power supply for the people of Lunana in the 23rd session of the National Council. The response was positive and hopeful.

With such a level of commitment from the highest authority, I am optimistic that project execution will begin soon.

Lunana Gewog under Gasa Dzongkhag has five chiwogs with 13 villages. Over 1000 people are residing above 3,500 metres above sea level. Only one community, Ramina is connected with the road in the gewog, and it takes over one week to reach Lunana on foot.

There is no electricity power supply, as it was not feasible to extend grid electricity to Lunana. The solar home lighting system is used to lighten Lunana today. Firewood plays a vital role in warming up cold high altitude homes and for cooking.

The absence of electricity has led to depleting the limited forest coverage in the place, according to Druk Green Power Cooperation’s inception report on Lunana mini-hydropower project.

An independent feasibility study conducted by Bhutan Power Corporation Limited (BPC) in 2018 established that a mini hydropower project of 300 kW is feasible on Chuzachhu – a tributary of Phochhu near Toenchoe village.

However, the feasibility study recommended further investigations on the topographical survey for waterways and transmission line, geological and geotechnical investigations for major structure, and socio-environmental assessment, among others.

Therefore, the Department of Renewable Energy, Ministry of Economic Affairs (DRE) in its 12th FYP has provisioned to undertake feasibility and development of power supply to Lunana community. In this respect, DRE has assigned Druk Green Power Corporation (DGPC) to conduct the preparation of Detailed Project Report (DPR) of the mini-hydropower project in Lunana as deposit work within the current financial year 2019-20.

A multidisciplinary team from DGPC and DRE has been deputed to Lunana to carry out site survey and investigation from September 9, 2019, till October 13, 2019.

As per the inception report, the rapid river runoff at Toenche has the potential to produce over 415 KW of energy, which would be able to provide power supply to more than 200 households.

The inspection report and survey also anticipated power demand of the Gewog at about 500 KW. Essential establishment of assessment was made and planned to carry out lean season flow measurement of Chuzanchhu, useful data to understand the power potential of the project is also in the plan.

As per the report, the proposed project is expected to reduce the dependency of Lunaps on firewood, thereby helping to conserve the catchment area of Phochhu River, one of the ultimate sources of Punatsangchhu Hydro projects. It will improve people’s health and sanitation with the supply of clean and reliable energy for cooking and heating.

The report stated that appropriate environmental management plan would be formulated as part of the environment and social impact assessment of the project. The local people have shown strong support and anticipation of the project during the consultation.

The proposed mini-hydropower project is expected to electrify 10 villages except for Wachey village (14 HHs) located on the other side of Kayja La pass (El. 4,650 masl). It has not been considered mainly due to longer transmission length and the requirement to cross the high pass.

Based on the request of the Department of Renewable Energy (DRE), DPR study of Lunana Mini-Hydropower Project has been conducted by Druk Green Consultancy (DGC) in close coordination with DRE, for providing an off-grid electricity supply to Lunana community and institutions.

The total cost of the project is estimated at Nu. 605.24 million and Nu. 662.93 million without and with Wachey village electrification respectively at December 2019 prices.

Since the cost difference is approximately about Nu. 57.69 million, I would highly recommend the Government to consider including Wachey village in the proposed project instead of providing an alternative, independent power source in the form of micro-hydro (at least 33 kV). The comprehensive cost-benefit analysis needs to be carried out to choose the best option considering the reliability, long-term maintenance cost, human resources requirements and other related costs in the future.

Bhutan achieved 99.97 per cent of households connected with electricity as part of Bhutan 2020 vision document. The remaining 0.03 per cent constitutes 200 households in Lunana. To this, Bhutan Power Corporation’s chief executive officer said, while 99.97 per cent is as good as 100 per cent but we cannot breathe in peace unless we electrify Lunana (June 25, 2018, Kuensel).

Moreover, providing reliable power supply in Lunana was one of the major pledges of the current Government and should consider as the top priority in the 12th FYP. The feasibility study has been carried out recently and the detailed project report (DPR) was submitted to the government in January 2020, but more needs to be done to make a dream come true for the people of Lunana.

As per the report, providing basic amenities like reliable electricity in the region which are located closer to the national border, would encourage local communities to stay in their ancestral home which is strategically essential for maintaining border security and also discourage rural-urban migration. In view of the above all, the report highly recommended the government to consider the development of the project to enable socio-economic development of the remote communities located close to the northern border.

Having worked as an engineer and after visiting the precarious sites of Raphstreng and Thorthomi lakes in Lunana, the protection of the catchment and the need to reduce pressure on the environment has become crucially important.

As the representative of the place and having experienced the hardships of the highland myself, I hope the last place remaining in the country without power supply would soon be connected with reliable power supply for the benefit of one and all.