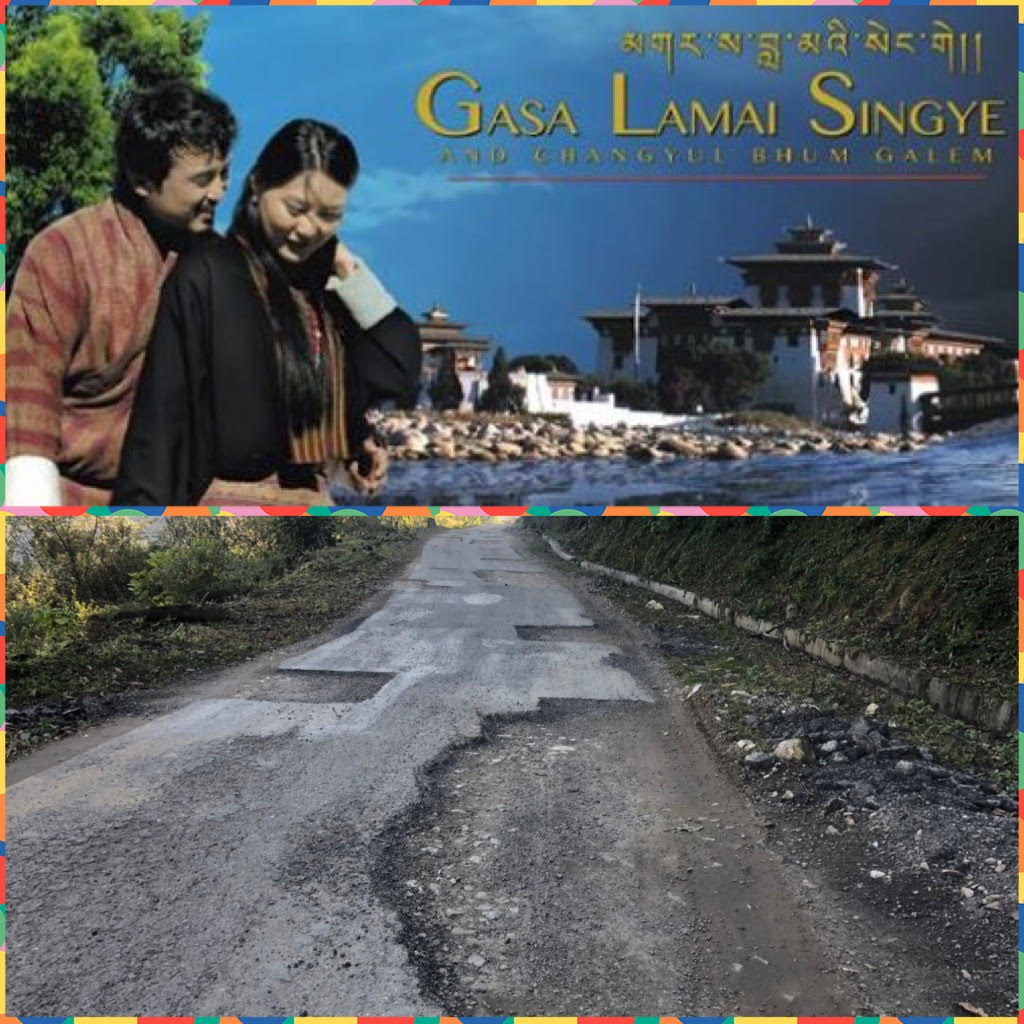 The roads, despite being crucial for ensuring administrative ease, economic development through tourism and livelihood enhancement through connectivity, the quality and work progress of the roads as mentioned earlier have remained a major stumbling block thus disappointing the people.

If one gets to ply on this road, it is noticeable that the quality is no better than farm roads elsewhere – marshy and sinking areas have continuously obstructed blacktopping, and those blacktopped are to be mended now and then. Worst of all, the lack of timely and proper monitoring has led to quality compromisation.

The standard design pavement as regulated is not suitable because of the difference in soil bearing capacity, different high altitude, weather situation and high traffic intensity as the Dzongkhag being one of the most sought tourists and trekking destinations in the country.

As per the Road Act 2013, Road Rules and Regulations 2016 and Road Classification in Bhutan 2017, the secondary national highway to be blacktopped with AC/PMC 25 mm, which could not sustain the harsh weather and the road stretch with adverse weather conditions and soil properties causing a significant impact on the quality of blacktopping. The problem couldn’t be solved despite increasing the thickness of AC to 40 mm as per BoQ of the contract awarded.

Numerous literature and studies oppose applying of AC or premix carpet in the marshy area owing to its nature of losing Bitumen because of continuous water sipping occurring in such conditions.

The works at second and third phase stretch of road in Gasa has begun since December after monsoon stopped the work for months. In most location, the roads could not be blacktopped because of the marshy conditions throughout the year (due to rain during summer and ice & snow during winter).

During my inspection with a team from Dzongkhag in November 2018, we found that the applied PMC and the thickness of blacktops were not uniform and the stretch completed with blacktopping had to undergo repairment within a few months of completion. The change in the standardization of pavement design is the need here.

The pavement design specifications are not standard, and a proper assessment is required, keeping in mind the differences in soil properties, geological stability, traffic parameters, and also the climatic conditions.

The situation does not remain a stand-alone, and I am confident many other Dzongkhag roads classified under the secondary national highway (SNH) would have faced similar problems.

My perspectives and concerns over the quality of road blacktopping from Punakha to Gasa are evident from the audit findings in the Annual Audit Report 2017 which states “The Regional Office, DoR, Lobeysa had not directed the contractor to rectify defects noted in the resurfacing/Blacktopping of Punakha-Gasa Secondary National Highway (SNH) between chainage 21km-35km. The defective works requiring rectifications was pointed out during the previous audit as well, but were not carried out at the time of audit in September 2017.”

Unless there is a change in the Road Pavement Design and immediate intervention of resurfacing or re-blacktopping of the roads with Dense Bituminous Macadam (DBM) as in Primary National Highway, the ongoing blacktopping from Punakha to Gasa will disappear like morning dew. Having had an engineering background and witnessing the field issues personally, I could guarantee that this project will neither save the Government’s budget, nor will it benefit the public. Being a bonafide citizen of the Drukyul, I am concerned about the quality of our development activities and do not hesitate to raise my voice for the people of Gasa in specific and the nation in general.

Nonetheless, the question and answer session with the Minister for Ministry of Works and Human Settlement in the 11th sitting of the 22nd session of the National Council was an assuring one and I, on behalf of the people of Gasa remains indebted to Ministry, and soon enough, a favourable outcome is anticipated.