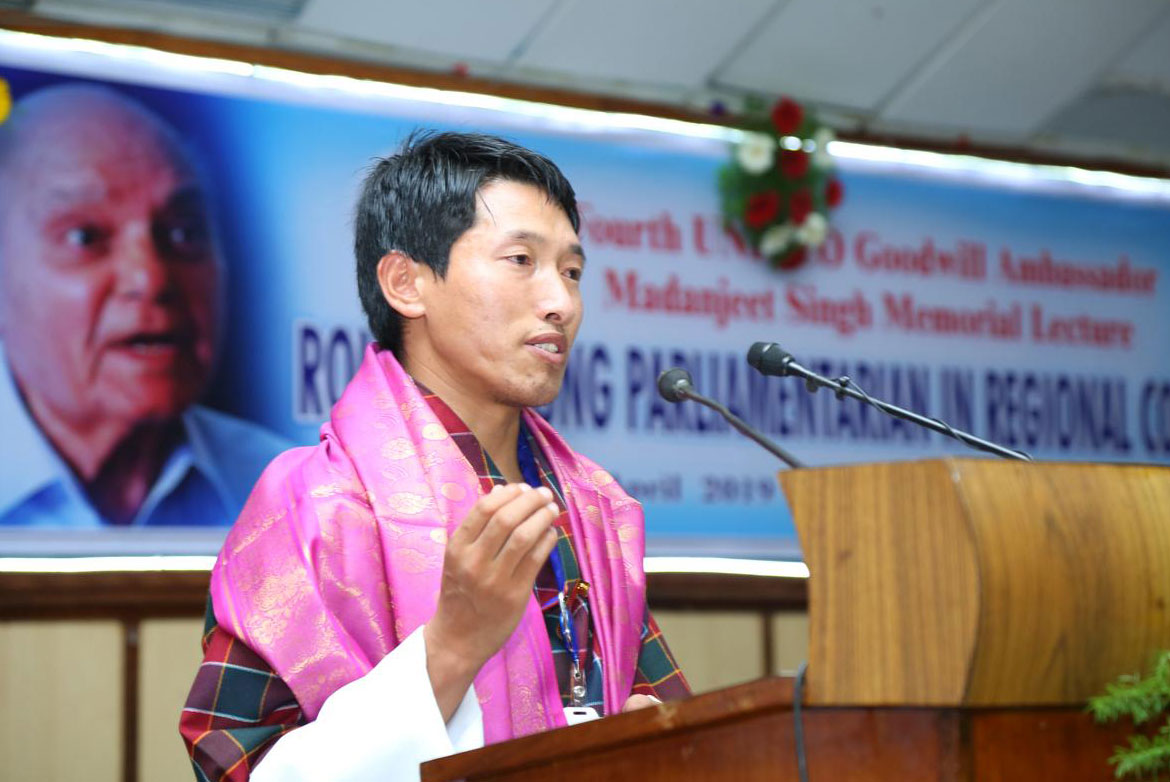 Speech by Hon. Dorji Khandu, Member of Parliament of Bhutan, at the UNESCO Goodwill Ambassador Madanjeet Singh 4th Memorial Lecture on the theme: The Role of Young Parliamentarian in the Regional Cooperation

Today we are gathered here to celebrate an icon of our time, and a great soul whose work in literature, art, humanity, and leadership is unparalleled.

I have the honor and privilege of extending to you the warmest greetings of His Majesty the King Jigme Khesar Namgyel Wangchuck and the people of Bhutan. I would like to thank the Pondicherry University and South Asia Foundation for the warm reception and generous hospitality extended to me since my arrival in Chennai.

I would also like to convey my sincere appreciation & gratitude to Mme. France Marque for inviting me to be part of today’s event. More so, I am extremely pleased to be sharing with the August gathering today, my views on the role of young parliamentarians in the regional cooperation as to celebrate the legacy of late Madanjeet Singh.

Having served in UNESCO for about half a century, his name is synonymous to this esteemed organization itself. It is beyond doubt that everyone gathered here would share the same opinions as mine every time we remember late Madanjeet.

As part of its celebration and to keep alive the tradition, the university has been inviting outstanding alumnus of recognizable personalities to participate and deliver during the Madanjeet Singh’s memorial lecture every year.

To this, I accolade the university and its faculties for such meaningful arrangement. And, I’m once again honoured to be standing here with you all today. Frankly admitting, I’m neither qualified nor an outstanding personality yet, but being one of the recipients of the prestigious South Asia Foundation Scholarship and reaffirming my position now as one of the youngest parliamentarians, I am deeply humbled to pay my gratitude and tribute to the late Madanjeet Singh. This occasion, therefore, is rare as gem and special as my very own living.

Now, though the geographical structure of Bhutan may be less known to many of you, yet again this may equally be an occasion to share a glimpse about my root. Something that interests me and I’m sure it will also be of interest to you all.

I was born in a Highland community called Laya and to put it simple, I’m a son of nomads. We rear one world-famous animal species called Yaks.

Laya, my village, though a popular destination for tourists, is still not opened to a motorable road. To my vanity, I was among the first to hold a university degree from my village. My graduation then was a piece of news that stormed media. Quickly enough, I became quite a celebrity in my own country by default of being a nomad graduate.

As saying goes, with difficulties come blessings, frankly speaking, my degree was the most prestigious scholarship bestowed directly from His Majesty the King and that was how I earned my first engineering degree from Thailand.

My position among young politicians in my country was not without sacrifice and hard work. It was difficult to convince people to vote for a young fresh graduate and even worse when the total voter is just over 2000.

In 2013, I have contested for the first time when I was just 26 years old. I tried but did not succeed. Nevertheless, I stood up again for my dream and I am living that dream today, representing my people in the truest sense.

I would like to share that Bhutan’s house of review is led by one of the youngest chairpersons since democracy was instituted a decade ago. Many young MPs won seats in the parliament, including young women MPs.

As we move on to confront the common challenges of eliminating poverty, boost gender equality, address youth issues, managing environment and natural resources, adaptation and mitigation of  climate change and building resilience to natural disasters, take measures to counter terrorism, promote human rights, invest in renewable energy, and among others in the region, I would like to reinforce that the solution is in enhancing regional cooperation and even more important to include young parliamentarians in this movement.

Despite youth making up 35 percent of the population in South Asia it is less encouraging to learn that only minimum percentage of them are in the parliaments and their potential to promote socio-economic growth and enhancing gender equality are a shortcoming.

Recently, I was attending the 140th Inter-Parliamentary Union Assembly at Doha in Qatar from 6-10th April. IPU research has revealed that in 2018 only 2.2 percent of parliamentarians were under 30 years old and 15.5 percent under 40 in lower chambers and unicameral parliaments in the region.

As per the IPU report, promoting the participation of young people in political life is becoming a higher priority worldwide. Over one-third of the 169 targets established as part of the United Nations Sustainable Development Goals (SDGs) relate to young people and the importance of their empowerment, participation, and well-being.

Twenty targets across six SDGs-relating to hunger, education, gender equality, decent work, inequality, and climate change-specifically focus on youth. Young people’s participation is also vital to the achievement of two additional SDGs: on peaceful, just and inclusive societies and on partnership and implementation.

I believe that young MPs have a crucial role to play in eliminating poverty and addressing youth-specific needs and interests. Sometimes the brightest ideas emerge from young minds, especially on issues they face in real life situations.

Working towards the common goal of achieving SDGs requires the partnership of government, the private sector, civil society and citizens to save this planet for the future. The right way is to include young parliamentarians in these strategic plans and foster mutual learning to support each other in the region.

At times, I have this pertinent thought popping up in my mind every time that if we, the younger generations do not care about our future, who will and who should? Because we have longer years to live and we have futures to make. We have the responsibility, logic, need, and rationale to serve our country in specific and the world at large better. If then, why don’t we act from now on?

Climate change is hitting us hard and that is due to an insatiable desire for so-called ‘unsustainable development’, a concept propagated by some western thoughts, and therefore the world is deeply cornered in four walls.

If a cat is cornered by a dog and it has nowhere to escape, it fights back. Similarly, nature and our world has already begun fighting back on us like a cornered cat.

As the world become warmer, extreme weather events are becoming more frequent and intense, Glaciers have begun melting, sea levels are rising, prolong droughts are putting pressure on food crops, many animal and plant species are being driven to extinction and polluted airs have begun causing lung cancer.

Worst of all, small countries like ours suffer the most impact out of others’ carelessness. Though Bhutan maintains 72 percent under forests cover and though Bhutan is a carbon neutral, for how long can we remain carbon neutral? An avalanche of Indian and Chinese pollutions alone can engulf tiny Bhutan’s effort of environmental conservation.

It’s hard to imagine what we as individuals can do to resolve a problem of this scale and severity.

That is why, as I stand here today, especially as a young Parliamentarian who cares for the world, groomed with the support of South Asia Foundation Scholarship (SAF) beyond engineering to serve the world better, I will voice out for world happiness. I will protest for peace and tranquility in the region. I will commit myself strongly for legislative proceedings that can make the world better.

It is never too late for us to take action and fight like our lives depend on it -because they do. In fact, Climate change is a global problem, felt on local scales, that will be around for decades and centuries to come.

Generally speaking, to sum up, increased regional cooperation is the answer to all these problems. Like today, we must continue to exchange our views and think through global solutions to regional and country-based issues.

To conclude, I would like to highlight the need to encourage young parliamentarians in political processes to understand better the issues related to youth like unemployment, inequality, discrimination, and lack of access to quality education that is pressing in the region.

To empower young parliamentarians, there is a need to give them a voice in the policy and decision-making process of their respective governments; provide them with required skills and knowledge to engage their governments more effectively and in issues significant to young people.

May I end my speech paying tribute once again to Shri Madanjeet Singh for playing a part in giving me the opportunity to become the leader I am today.

Tashi Delek! Thank you all.

Letter of Gratitude to Gasaps 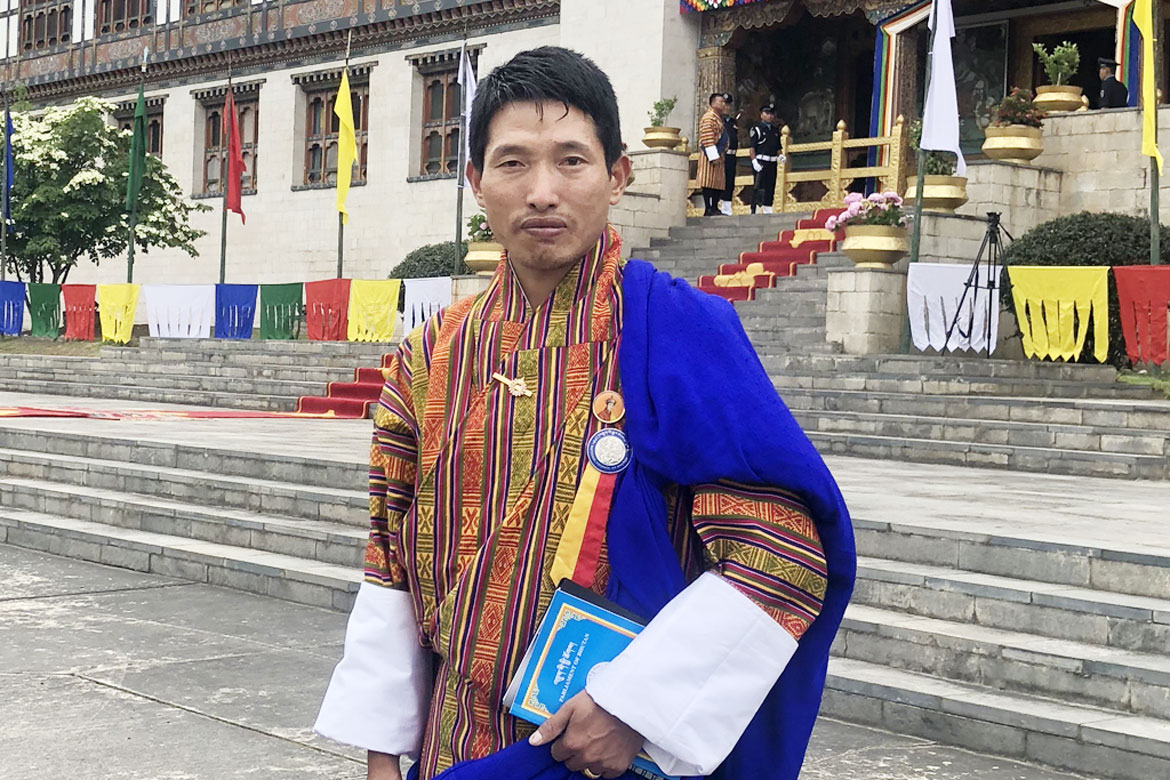 It’s been a great privilege to serve the people of Gasa Dzongkhag since being sworn in as your representative in the Parliament of Bhutan on May 10, 2018.

I would like to express my heartfelt thanks to the people of the Gasa District for electing me as your representative in the National Council of Bhutan. I am honored and humbled that you have placed your trust in me.

It has been so encouraging to meet so many well-wishers and supporters. During my campaign travels, I have interacted with people from all walks of life and had the pleasure of listening to their experiences, stories, and issues.

With your trust, I will work tirelessly on your behalf in fulfilling the sacred mandate of this great institution, the fulfilment of the visions of our great monarchs and dreams of the citizens. I will continue to work hard to ensure all Gasaps have a strong voice in the Parliament.